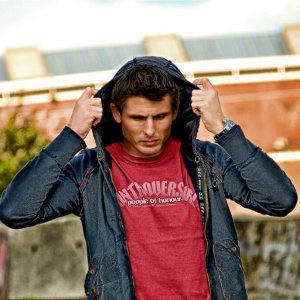 Within a short while he was spinning at his own parties. It didn’t take long before he got in contact with the owner of the Scala Dance Theatre (Netherlands) where he became resident DJ. Artento performed besides great names like: Marco V, Bas & Ram and Hennes & Cold. The Friday nights became so successful and Divini’s name was set.

In the year of 2002 things picked up fast. He spinned at Xxlerator, (Club Matrixx) and Index in Germany. To top it all off, he picked up his suitcase and went 3 months to Manaus, Brazil, performing at several clubs and parties like Eco System 2.0, Amazon’s largest jungle party.

Back from Brazil and fully inspired, Artento was invited to perform at a club in Amsterdam. In this club he met his budy Melvin Warning, they started a collaboration and the duo Divini & Warning was born.

They spinning together in trendy clubs like XL, Lexion and The Hemkade. In the year 2006 they performed a back to back session at the main stage of Pleasure Island.
In 2006 Divini & Warning delivered a smashing techtrance monsterhit with the track “4LB”. The tune got picked up by Paul van Dyk, Armin van Buuren, DJ Tiesto, Marco V and many others. Armin even used this track as an opening theme at the main stage of Dance Valley Festival 2006.

Now the name Divini Warning was set, questions from other great names came in, they did remixes for Abel Ramos “te qiuero puta”, Roy Gates “Midnights Sun” and even Matt Darey “Animal” (the last one is not released yet)

The follow up of 4LB is a track with a story, This track is named to “Chaib” after a very good friend who past away on an age of 34 in a diving accident. Chaib was a man who loved his life and that’s the message Divini Warning wants to bring with this track ; don’t worry about tomorrow and live today.

“Chaib” was a long time a favourite song of Sander van Doorn, and he played it all over the world

In December 2006, Artento Divini quit his job and started his own production company, he concentrated more and more on his productions and also for other dj’s like EL TORRO and JOSHUA KARDELL als known as DJ JOSE.

With Jochen Miller he picked up one of Miller’s old projects “Silent Electra” also the track “One Way” which is the first collaboration between this two guys. “One Way” will be released on the MASSIVE label (Midtown Records) and has a Artento Divini Mix and a Jochen Miller Mix.

The track is an electro style track with girlpower voice by MC BOOGSHE
The new Artento Divini released on the 19th November 2007 is named “PULSE” and is a switch in the style of Artento’s music, the track has “minimal”, “electro” and “trance” influences, BPM lower but a fat bassline.