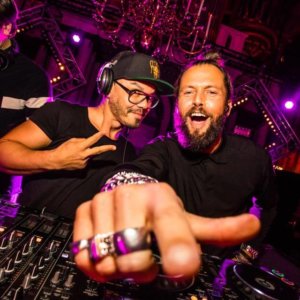 FULL COLOUR INNERCIRCLE – POWERED BY LA FUENTE
Born and raised in The Netherlands, La Fuente learned about electronic music at an early age. After dozens of national gigs, he started touring in other countries too. Now, after performing and entertaining for more than 15 years on national and international stages, La Fuente breeds a very passionate following and his gig list stretches almost the whole planet.

Last year La Fuente pushed his limits. With 350 shows he traveled the world and left behind a great trail of club and festival sets that have captured the hearts and souls of the fans. During the festival season this summer he did 90 show and took 60 flights in 65 days. People in almost every global territory like Europe, US, Asia and South America were amongst the lucky people that experienced his energetic performances.

La Fuente has a very unique sound: House music at it’s best – Uplifting, energetic and smile-inducing. His excellent knowledge about the current wave of dance music, his fearless attitude when it comes to experimenting with new records and mixing styles way before his competition does has definitely paid off!

This DJ is a true artist, always bringing an amazing vibe to the stage and tearing the roof apart every single time – this might explain why promoters all over the world love him so much and fans call him the feel good factor.

La Fuente has proven to be an accomplished producer to the experts and DJ colleagues over and over again.

His records are described as ‘they were created for maximum dance floor impact.’ His hit ‘Bang Bang’, which was released on Laidback Luke’s Mixmash imprint, has become a true classic.

Another successfull release out of La Fuente’s kitchen, called ‘Dounia’ (Spinnin), received early support from every player in the game and his tune ‘Fancy Fair’ (DOORN records) also jammed it’s way up to the top 10 position in the Beatport Chart.

Add ‘Buzzing’ (MixMash), ‘Matador’ (Spinnin) and ‘Outlaw’ (Oxygen), to that list and spice it up with the international hits, ‘Selecta’ (Spinnin), ‘House Detective’ (DOORN Records), ‘STICKUP’ (WALLRecordings), ‘4000’ (HEXAGON), ‘Capitol’ (Hexagon) ‘Show me how to love’ (SPinnin), THE nr1 ‘ep’ release on beatport, ‘bring that house down’ (heldeep) AND THE OFFICIAL REMIX LA FUENTE DID FOR MAJOR LAZER and VIBE magazine naming La Fuente as the Artists You Should Listen To (Right Now!).

La Fuente’s list of achievements accumulates. New releases are scheduled on HEXAGON, Spinnin Records, MUSICAL FREEDOM and more. This born perfectionist is working on rapidly expanding his discography between appearing at the major festivals, alongside countless arena and exclusive club shows around the globe.

La Fuente’s radioshow ‘Full Colour’ , that airs monthly, the versatile DJ explores his creativity by picking a colour to use as basis for the show’s vibe. Every show brings another colour and mood. Additionally, the Full Colour podcast has earned a solid spot in the Itunes Top 10 every month.

The future still remains
Yet even as the achievements and accolades stack up, La Fuente can’t stop looking forward to the next party, the newest tunes and the good times still to come. With new releases scheduled on HEXAGON, Spinnin’ Records, WALL and Sander van Doorn’s imprint DOORN records and gigs scheduled at the most wanted stages, La Fuente’s future looks brighter than ever!