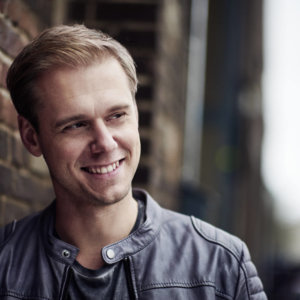 A man driven by an unbridled and relentless passion for music. A born perfectionist, striving to stay on top of the scene he’s helped to grow. The flag-bearer of the trance movement, one of the biggest scenes in EDM worldwide. A down-to-earth guy, living the extraordinary life of one of the world’s most popular DJ’s. Armin van Buuren is always on the move, whether through the music he creates in his studio, or bound to the next high-end club or festival somewhere around the globe.

Armin:”It’s not just love for music, it’s my passion. It goes beyond liking, and beyond a hobby, it’s about a way of living. Music is essential to my life.”

For more than 15 years, the Dutchman has been living to the rhythm of his own, international success. A 5 times number one position in the critically acclaimed  DJ Mag’s Top 100 poll is the result of his loyalty to fans, his creativity in the studio, the perseverance with which he hosts his weekly radio show A State of Trance and the energy he transcends to the crowds in front of him. Despite the heavy pressure that comes along with being the world’s most popular DJ, Armin has always kept his focus on the music. And that’s exactly what keeps him going.

THE DJ
No matter how many hours Armin van Buuren has travelled to get there, as soon as he enters the DJ booth, the Dutchman  has his full focus on the music, the crowd and how these two will combine. As soon as the beats of his first record have kicked in, the room lights up and chanting fills the air. To witness a set of Armin van Buuren is to be blown away, to completely lose yourself into the music and be one with the people around you. Mixed seamlessly, he created his own style and sound, making his DJ sets a unique experience. He unites millions, not only through the gigs in his challenging schedule, but also through his Armin Only and A State of Trance world tours.

Armin has the privilege to perform at some of the world’s biggest and best festivals, clubs, events and shows. One of the highlights in his career was Armin’s DJ set at the Museumplein in Amsterdam in July 2010, during the honoring of the Dutch soccer team. Even though the national team  lost in the FIFA World Cup final, they partied like they were the absolute winners, and so did the 200.000 strong crowd. That’s exactly what Armin’s sets are all about.

His busy life as a number one DJ has inspired many people. In 2009, Dutch author Coen Bom presented his on-the-road-biography of Armin, called ‘Eén op één’ / ‘Armin Only’, reporting about the hectic life of Armin and trying to find the secret behind to the grand success of the humble Dutchman. In October 2012, the official documentary ‘A Year With Armin van Buuren’ was released,  in which Armin was followed during an important year in his life, offering a unique look behind the scenes and inside his personality.

THE RADIO HOST
What started as an obsession for radio and the production of it, has turned into a weekly highlight for more than 20 million listeners. In June 2001, Armin van Buuren aired the first episode of A State of Trance.12 years later into the game, he still hosts the weekly 2 hour show, in which he presents the biggest tunes of the moment, as well as providing an interactive way for fans to discover new music. Regular features of the show are the Tune of The Week, A State of Trance Radio Classic and the Future Favourite, of which the latter is based on an online voting poll.

Celebrating each milestone, Armin has announced an extensive world tour in early 2013, based around the 600th episode of the show. ‘The Expedition’ world tour lands in cities such as Mexico City, Sao Paulo, Beirut, Kuala Lumpur, New York and Den Bosch. The tour kicks off in February 2013 and includes shows in countries all around the globe, with events broadcast live on the A State of Trance website. Reflecting upon the A State of Trance 550 tour, which included no less than 23 shows in different countries, Armin says:”I think we’ve showed the world we can connect through music and the love for music connects people. The mission was a success. Now it’s time for a new mission…”

Each year, the listeners of the show are asked to vote for their favourite records of the year, with the A State of Trance Top 20 as the official outcome. Each track on this list ends up in the yearly A State of Trance Yearmix, released at the end of December. Weeks of editing and mixing come together in a 2 hour mega-mix of over 85 tracks and countless memories. More than 150,000 copies of the series have been sold, going strong for 8 years already. Another series that Armin has linked to the radio show, is the A State of Trance Classics compilation. After 6 years of providing some of the most essential classics and all-time favourites in EDM, the series continues to commemorate the early days of dance music.

In addition to the weekly show, Armin started the weekly A State of Trance podcast, with a selection of the previous episode of the radio show, ensuring that listeners will never miss out on the highlights. Every Sunday, Armin also hosts a 24 hour radio day called ‘A State of Sundays’, broadcast on one of the biggest radio stations in the United States, Sirius XM Satellite Radio. Next to the A State of Trance shows, A State of Sundays also introduces its listeners to sets and radio shows of other popular DJ’s and talented artists.

THE PRODUCER
Armin van Buuren looks back on the success of his ‘76’ (2003), ‘Shivers’ (2005), ‘Imagine’ (2008) and ‘Mirage’ (2010) albums. His latest album, ‘Mirage’, reached golden status in The Netherlands and Poland and includes collaborations with Sophie Ellis-Bextor, Ferry Corsten, BT, Nadia Ali, Guy Chambers, Christian Burns and Adam Young of Owl City. Armin:”Mirage has been the biggest project I’ve ever worked on. There’s so many hours in this. Many new techniques were used and most of all I had so much fun creating this with the many people that are involved. It was a journey, an epic one!

May 2013 marks the release of Armin’s brand new artist album, ‘Intense’. The follow-up to his successful ‘76’, ‘Shivers’, ‘Imagine’ and ‘Mirage’ album features collaborations with Israeli violinist Miri Ben-Ari, US duo Nervo and singers by the likes of Trevor Guthrie, Emma Hewitt, Laura Jansen, Fiora and more.

Whenever he’s not on tour or having a daddy-day with his first-born, daughter Fenna, Armin locks himself up in the studio. Giving meaning to his famous quote ‘Don’t be a prisoner of your own style’, he explores the boundaries of EDM through his originals and remixes. Some of his most beloved works, such as ‘Communication’, ‘Blue Fear’, ‘Shivers’ and ‘Yet Another Day’, have grown into all-time favourite classics, withstanding the test of time.

With remix offers flooding in, Armin has the luxury of taking on only the tracks that he really loves. His remix discography includes cult TV series 24, Danish TV series The Killing, Dutch film Nova Zembla and tracks by the likes of Motorcycle, The Killers, Faithless, BT and Kerli.