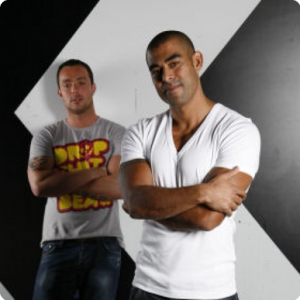 What all started as just a hobby for the love and passion for house music, has rapidly evolved into serious music business. Known and loved for their highly addictive latin based house cuts, combined with an occasional progressive sidestep, Amsterdam based DJ/producer duo Brian Chundro & Santos invaded the industry out of nowhere in 2009. In the meantime, the duo had a taste of chart successes and may count on an ever increasing group of followers and fans, whilst also gaining the respect from their colleagues in the field.

The energy Brian Chundro & Santos bring to the booth and their crowd rocking performances, held in an impressive list of prolific clubs, venues and festivals throughout the whole of Europe are becoming legendary. With a solid record and management deal at Dutch company Selekted Music in the bag and a brand new booking agency, the possibility of pursuing a fruitful music career looks bright for this talented Dutch duo.
Brian Chundro & Santos’ productions and remixes may rely on the support by national A-list artists such as Chuckie, Gregor Salto, Real El Canario, Vato Gonzalez, Melvin Reese and Sunnery James & Ryan Marciano. On an international level, tastemakers like Roger Sanchez, Bob Sinclar, Erick Morillo, DJ Gregory (Defected Records), D.O.N.S., Kid Massive and many more colleagues embraced their production skills resulting in international recognition for the duo.

Brian Chundro got infected with the house virus at a young age. He witnessed the rise of the Dutch house scene starting in the early 90’s, got influenced by by the Dutch upper league of DJ’s to eventually decide to start DJ-ing himself. Brian and Santos first met in 2007, discovered they both have a deep rooted passion for quality house, swapped some ideas and formed the DJ team nowadays known as Brian Chundro & Santos.
Santos (Ramon Moolhuijsen) bought his first DJ set at the age of 14. His first love music wise consisted of R&B, hip hop and 2step. At a young age he already had the opportunity to play in clubs like Escape and the iconic club RoXy. In the years that followed, his music style changed as Santos developed an affection for house music. In 2007 he teamed up with Brian Chundro to eventually become DJ duo Brian Chundro & Santos.

The track that jumpstarted their music career became their remix for Me Faz Amar by Tiko’s Groove feat. Mendonca Do Rio, initially produced as a personal bootleg for their DJ sets. Me Faz Amar originated from Brasil where local legend Tiko’s Groove produced this monster tune but all available mixes aside, it were Brian Chundro & Santos who turned the original version into a straight up latino dance floor killer.
This much sought after remix became Tune Of The Week on Dutch portal Dance-Tunes.com in the all genres section, shot to the # 1 position in their Top 100 within a week and vastly turned into one of the most viewed tracks on Dance-Tunes.com ever. Their remix made its way to an impressive list of compilations such as Radio 538 Hitzone, Brutal, Latin House Sessions 2010, Latino Grooves 2010 and The Beat Of Summer (powered by SlamFM). To date, their remix for Me Faz Amar is still considered one of the biggest dance tracks of the 2010 summer season.
With a great deal of determination, Brian Chundro & Santos manage to maintain a high level of churning out massive tunes on a steady basis with EP’s lined up for release at home base Selekted Music and the internationally acclaimed Defected Records. As Brian Chundro & Santos are much in demand remixers, they showcase their remix skills on tracks by none the less than TJ Cases, DJ Gregory, Gabriel & Castellon, D-Rashid, Stefan Vilijn and Carlos Silva. Currently, Brian Chundro and Santos are the residents jocks in various clubs such as Powerzone, Escape, Manhattan and on events and festivals like Latin Village, Salsa Lounge and all Sexy House editions.

Early 2010 saw the grand opening of their very own party concept House of Passion – a ceremony hosted by Dutch DJ icon Erick E -, a full entertainment concept in which live artists and instrumentalists play a prominent part alongside the performing DJ’s. The concept is all about luxury, style and musical creativity. Throughout 2011, We Are Golden concept will experience a number of editions to be held in established venues, where Brian Chundro & Santos will be accompanied by the best artists the current Dutch house scene has to offer.
Brian Chundro & Santos prove that hard work, dedication and ambition pays off. With the release of new high quality club tunes in the near future, this dynamic duo will prove to be a force to be reckoned with in the global dance industry. Be on the lookout for their gigs in the clubs and their future releases!