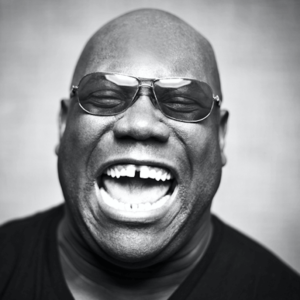 Check him when he’s behind the turntables and you can’t mistake his ecstatic visage, dripping with sweat as his head bobs up and down to the beat, his hands pumping the air whenever they’re not manipulating the turntables, his body swaying back and forth, frequently taking to the mike to share word on the latest underground tune he’s about to break. You name it, Carl’s been there and done it, but he’s never lost sight of the point of it: playing music, breaking tunes, spreading love, celebrating life.

In 1977, aged 15, Carl got a set of turntables and began working as a mobile DJ. Disco was the first music that captivated him but by the early 80s Cox had moved on to playing the same music as other young London DJs – rare groove, New York hip-hop and electro. He was perfectly placed to hear Chicago house music in its earliest forms, and when the epic ‘Acid Trax’ by Phuture (a.k.a. DJ Pierre) came out in early ’87, “I was just ‘This is it.’ I would do my parties, and I’d play old rare groove and hip hop and soul and I would say ‘Right you’ve got to hear this Phuture track and people would just stop. It’s funny because all the people who thought I had freaked out then are the people who are making the music now.”

As a founder of the sound, Carl rode the exploding British rave scene. He played the opening night of Danny Rampling’s legendary Shoom, co-promoted The Project with Paul Oakenfold, held a residency at the Zap Club in Brighton and at the Sunrise rave in 1988, hooked up a third turntable for his dawn-breaking set, got 15,000 kids back on their feet, and established a personal rep for three-deck wizardry.

The next step was to make music, and Carl’s 1991 debut single for Paul Oakenfold’s Perfecto label, ‘I Want You,’ gave him a top 30 hit and a Top of the Pops appearance. Two more singles also made the charts. But Carl was a reluctant pop star and as the masses moved onto fluffy house and trance, and the hardcore created jungle, Cox retreated into the club world that had nurtured him and instead embraced the underground sounds of techno. “Techno drives home somewhere,” he says of his core music. “It takes you to an element of surprise, not knowing where you’re going. It’s scary but wonderful at the same time.”

Carl’s classic releases include his 1995 mix CD, ‘F.A.C.T.’, which became a techno benchmark, selling over 250,000 copies and Carl’s 1996 EP ‘Two Paintings and a Drum’ again broke the British top 30. Alongside Carl’s ‘Ultimate Music Management’ company, which counted Josh Wink and Laurent Garnier among 27 clients, there was the Ultimatum record label, for which Cox recorded his third top 30 UK single ‘Sensual Sophis-ti-cat.’ In 2005, Carl’s third album, ‘The Second Sign’ caused a stir across Europe and reached number 3 in Spain’s national chart. Also gaining critical acclaim was speaker freaker ‘Dirty Bass’ a collaboration with Christian Smith and the funky ‘Give Me your love’, both released on 23rd Century Records, an outlet for his own burgeoning production output.

After forming Intec Records in 1999, the label went on to score a series of underground hits. Continuing his mission to conquer the entire world, seeing as Carl Cox Global radio show’s audience figures have reached 2 million per weekend, it’s little wonder Kiss 100 FM recently head-hunted Carl as a figurehead for their re-launch. Global’s world syndication has dominated airwaves in the prime-time slots of some of the world’s premier radio stations for nearly 3 years, running weekly across twenty countries, including America, Argentina, Turkey, Romania and Lebanon. Carl made a triumphant return to Kiss with a show entirely dedicated to new music. Guests include Sven Vath, Jaques Lu Cont and Josh Wink with label profiles on Buzzin’ Fly, International Deejay Gigolos and Soma amongst others.

To celebrate the 50th release on Intec, Carl was the recent cover star of respected dance institution DJ magazine. The occasion was also marked by two fresh Carl Cox productions on the label – ‘Spoon’ and ‘K’Pasa’, the former a tribute to Carl’s friend Mark Spoon (of Jam and Spoon fame) who sadly passed away. On the style of the tracks, Carl explains, “Spoon’ is a deep, melodic, track with strings and ‘K’Pasa’ is a more druggy, tribal track. They might not be the in-sound of today, but it’s what I like.”

This year marked the fifth anniversary of Carl Cox at Space, Ibiza. Never one to play it safe, the line up was reliably varied, with Carl fast cementing a status as an ambassador for all things eclectic, as he states: “It was as varied as the year before, with Josh Wink, Laurent Garnier, and Francois Kevorkian on one hand then people like LTJ Bukem, Fatboy Slim and Adam Freeland on the other, to name but a few. As with last year we proved you can have funk, soul, Latin, jazz, d&b – anything. It doesn’t just have to be house.” The 2006 season did not go un-noticed through the night winning ‘Best Ibiza night’ at the Ibiza DJ Awards.