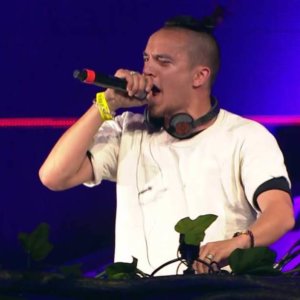 Tuparia was born in Delfzijl, Netherlands. His father was a guitarist, and his mother was a music enthusiast, so he was exposed to music from a very young age. He began playing the drums at age 7.
Tuparia attended the Academy for Pop Culture in Holland to study for his bachelor’s degree. During this time, he attended a Yellow Claw concert and met with the DJs after the show, where he was asked to send them some of his music.[2]
Music career[edit]
In 2012, Cesqeaux began collaborating with Yellow Claw. Additionally, he performed a supporting act for Diplo in Las Vegas, Nevada. He received airtime on BBC1Xtra and his remix of Putchabackinit by DJ Sliink was featured on 22tracks.
In 2013, Cesqeaux performed in the Dance Valley and Fusion of Dance music festivals.[1]
His remix of The Dopest by Moksi was listed the 8th best trap song of 2015 by runthetrap.[6]
In 2016, Major Lazer released its official Peace is the Mission Remixes album, featuring a remix by Cesqeaux of Night Riders (feat. Travi$ Scott, Pusha T, 2 Chainz & Mad Cobra.)[7] His music was also featured in sets at the Ultra Music Festival in Miami.[8] Additionally, he performed at Tomorrowland Brazil, Tomorrowland Belgium, Mysteryland and Parookaville music festivals.[5]
In June 2017 he co-produced “2U” in collaboration with David Guetta, Giorgio Tuinfort and Justin Bieber.[9]