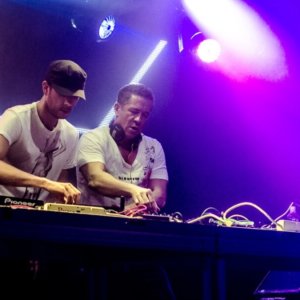 First they woke your mind… now START TO FEEL! From Cosmic Gate’s very first drumbeat through to ‘Start to Feel’ – their new convention-challenging long-player – they’ve proved to be the perfect alliance of musical minds. A by-chance meeting in a Cologne recording studio in the late-nineties set Nic Chagall and Bossi on the course to becoming Germany’s most successful and enduring electronic music duo. Their original productions have thrust them to the highest reaches of download charts & streaming lists, whilst their remixography has included everyone from scene legends like Armin van Buuren to revered Hollywood composers like James ‘Avatar’ Horner.

Nic & Bossi’s behind-decks-brotherhood has now created floor-frission at an uncountable number of countries. They’ve sold out arenas, conquered electronic music capitals, spun at a litany of major festivals and 10 years into their career became the highest climbers on DJ Mag’s Top 100 chart. Driven by their critically applauded albums, club-busting singles  (incl. ‘Not Enough Time’, ‘Body of Conflict’, The Theme, So Get Up and ‘Falling Back’) and scene-defining classics ‘Be Your Sound’, ‘Fire Wire’ and ‘Exploration of Space’, their place in electronic music’s hall of fame has long since been locked.

As DJs, feeding off each other’s turntable creativity, Cosmic Gate continues to push floors to supernova around the globe. In North America they’ve smashed the EDC, Electric Zoo and Nocturnal festivals and road-blocked clubs and events including Bal En Blanc & Guvernment (Canada), ASOT650 at Ultra, Pacha & Governors Island, NYC and their Marquee, Las Vegas residency. Similarly floors have been shaken in other hotspots worldwide, Tomorrowland, Belgium, ASOTs worldwide, Zouk, Singapore, Global Gathering, UK and Future Music Festival, Australia being but a handful). They sold out a 2000 capacity solo gig on Hawaii, as well as the Cosmic Gate Wake Your Mind In Concert events at the LA’s Palladium and Melbourne’s Festival Hall venues, each one hosting close to 4000 fans.

The summer of 2014 sees them approach one of their busiest festival seasons to date, as they play shows including Tomorrowland, Ultra Europe, Electronic Family, Global Gathering, SW4, and Creamfields. It will also see Cosmic Gate further expand their Ibiza appeal, branching out to play Space and returning to spin at the A State Of Trance nights at Ushuaïa.

C.G. Productions: In their homeland, Cosmic Gate has retained a consistently level of chart success, charting no fewer than 7 top 40 singles, and further afield scoring a UK Top 10 smash with ‘Fire Wire’. Most recently the pair completed their sixth artist album ‘Start To Feel’. The spiritual successor to ‘Wake You Mind’ (see below), through it Cosmic Gate inspired fans to experience electronic music in a deeper, wider, more complete way. It’s first single – the Eric Lumiere-vocalled ‘Falling Back’ – was described as “an-anthem-in-a-can” by the UK’s DJ Mag, who scored the track 9.5/10. ‘Start To Feel’ itself was hailed by UK electronic music publication MIXMAG as “audio chemistry and production physics in their most quantum forms”. Giving it their Album of the Month award, they went on to say “When they invent the amplifier that goes up to 11, you can score ‘Start To Feel’ 11. Until then it still has to be ‘just’ 10!”

Cosmic Gate’s earlier album years were marked out by ‘Rythm & Drums’ (in 2001), with ‘No More Sleep’ following in 2002 and subsequently ‘Earth Mover’ in ‘06. The latter, an artistic tipping point, edged the pair towards a more open-plan electronic music style and was the platform for the club hits ‘Analog Feel’, ‘Should Have Known’ and the IDMA-nominated ‘I Feel Wonderful’. ‘Sign of the Times’ landed 3 years later, bringing the vocal anthem ‘Body of Conflict’, a further IDMA-nod for ‘Not Enough Time’ and a then near unprecedented 43-place jump up DJ Mag’s Top 100 chart.

Wake Your Mind: In 2011 the duo released ‘Wake Your Mind’. It produced ‘Be Your Sound’ – a release which MIXMAG said: “finally unseats ‘Fire Wire’ as Cosmic Gate’s best-known-for track”. The track scored an IDMA nomination in 2012, with the JES-sung ‘Flying Blind’ following suit at the awards a year later.

Through ‘Wake Your Mind’s title, Nic & Bossi had communicated a belief in border-free electronic music to fans. Its message was embraced by untold thousands of clubbers and music lovers around the world, subsequently turning into a groundswell movement. The #WYM tag was widely adopted as the abbreviation-of-choice for those wishing to display a more flexible/less tribal outlook to electronic music.

Throughout late 2013 and early 2014, Cosmic Gate added other significant dimensions to Wake Your Mind, further spurring the #WYM effect. Following rave receptions to a string of sold out Wake Your Mind In Concert gigs they launched WYM Records. Attached to the Armada Label group, it was conceived as a home for freethinking, no-borders music, which was immediately underlined this by its first release. Winning widespread praise from the press, ‘So Get Up’ was seen by both fans and the media alike as an (aptly) bold ‘new-avenues’ musical exploration by Cosmic Gate.

Most recently #WYM has further come to encompass the Wake Your Mind Radio show. Across 60 minutes, the fully formatted broadcast features Nic & Bossi discussing and airing the tracks that have been setting their floors on fire. It’ll also encompass first-listen music premieres and tracks from the deeper side of the WYM psyche. The show, which is broadcast on Sirius XM, DI.FM and many other stations, also features comprehensive info on up-and-coming gigs, Nic & Bossi’s Big Bang track of the week and a host of other features including the Throw Back weekly classic and their Private Playlist tune.

Remixes: Over their production lifetime, Cosmic Gate’s remixes have become almost as illustrious as their productions. In essence a blow-by-blow of A-list artists, Nic & Bossi have lent their studio know-how to productions by Armin van Buuren, Tiësto, Paul van Dyk, Above & Beyond’s OceanLab project, Markus Schulz, Deadmau5 and Ferry Corsten. They rewired John O’Callaghan’s mega-seller ‘Find Yourself’ to breathtaking effect and produced remixes of veteran trance producer Vincent De Moor’s ‘Fly Away’ and ‘Carte Blanche’ (Veracocha). In early 2010 Atlantic Records US approached them to remix James Horner’s ‘I See You’ – the main theme from the film Avatar. This run culminated in Nic & Bossi being nominated for Best Remixer at the 2010 IDMAs. Most recently they put remix hands on Armin van Buuren’s ‘Pulsar’ release and Kaskade’s Late Night Alumni side project, reworking ‘Sapphire’ for Ultra Records USA.