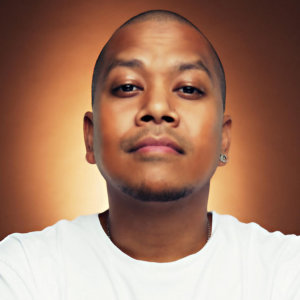 They say that a key ingredient in innovation is the ability to challenge authority and break the rules. Well, Chuckie has never played anything straight. He releases music across the musical spectrum from Dirty Dutch Music to Desolat and anything in between, his energetic DJ sets defy categorisation, spanning an immense range of divergent styles and the only unsurprising thing about his label is it’s remarkable ability to never cease to surprise. His sheer charisma combines with passion, talent, ambition and vision to create the raw, explosive and simply unstoppable power that is Chuckie.

Born and raised in Paramaribo, Suriname, Clyde Narain devoted himself completely to music from a young age. He started out by DJ’ing at friend-related events – this quickly transitioned into the debut of “Chuckie” within the local club circuit. The Netherlands is where his passion for hip-hop and electronic music truly flourished – eventually manifesting itself in his decision to become a fulltime DJ and producer.

Chuckie has been described as the “The King of Mixing” – his unique style and live performances have proven that moniker time after time. On the production side, his explosive rise to fame began with chart successes like ‘Let the Bass Kick’ and ‘Aftershock’. Chuckie’s career has continued to trace an exponentially upward trajectory that has escalated him into a world-renowned figurehead and tastemaker.

Alongside 2 MOBO awards, Chuckie has a stellar back catalogue littered with monster hits like ‘Move it 2 The Drum’, ‘Breaking Up’ ft Promise Land, ‘What Happens in Vegas’ and ‘Who Is Ready 2 Jump.’ He’s reworked the likes of David Guetta, Bob Sinclair, The Saturdays and Eric Morillo and even done official edits for P. Diddy and Michael Jackson. He’s also worked alongside megastars like T-Pain, Tinie Tempah, Kesha, Alexis Jordan, 50 Cent, Lil Jon, Akon and Lupe Fiasco.

His own multi-faceted ‘Dirty Dutch’ concept has evolved into a musical juggernaut over the years. It’s inimitable, genre-defying releases come from an explosive mix of exciting, up and coming talent and globally-renowned artists and its electric, world-wide events often attract stadium audiences of up to 30,000 people. Dirty Dutch continues to be a revered record label and a far-reaching musical brand that is a breeding ground of the industry’s most exciting talents

A dynamic, unpredictable and energetic performer, Chuckie holds down residencies in Vegas, L.A, New York, Chicago, Ibiza and many more. Playing headline sets at the world’s premier clubs, from Ibiza to Australia, Brazil and Japan, Chuckie regularly touches down in a different country each day, skipping across the continents to enthral fans at the most famous events in the world.

As part of his East Coast West residency with Tao Group, 2017 will see Chuckie taking up the reins at the new Avenue nightclub at the Dream Hotel in L.A. Having worked alongside Tao at Marquee and Lavo in NYC, Chuckie jumped at the chance when asked to open the venue in LA, which does not book dance music acts. Chuckie will be blowing minds with killer hip-hop as part of his open format sets at the club.

Chuckie’s irrepressible Dirty Dutch Music imprint will mark a seminal moment with its 100th release this year. Taking it back to the imprint’s very foundations, the MK EP features 17 tracks of urban and electronic acts from right inside Dirty Dutch heartland, NL. Showcasing that eclectic, energetic and upfront mishmash of styles, the special EP is bringing the Dirty Dutch house party vibes to the rest of the world.

Chuckie also has a new brand and label in the works. Set to go for 2017, the new project will take Chuckie to the next step in his restless career. Watch this space for further announcements. With no sign of slowing down, Chuckie is set to only further cement his place as one of one of the industry’s true pioneers throughout 2017.