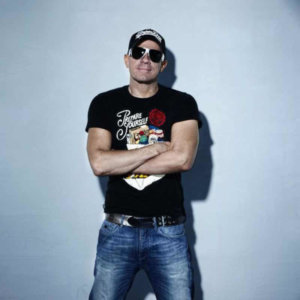 DJ JEAN, a name who left his indelible traces in the contemporary national and international club scene. Well known for his turntable “skills”, his notoriously rebellious dissolute lifestyle and especially as a dedicated DJ! He was also one of the first and very few DJ’s who gained his well earned status of a real Dutch celebrity! Jean is distinctive and overloaded with multiple awards, such as the SENA Award, an award for most played Club DJ on Dutch radio in the past ten years, he has been voted as BEST CLUB DJ for several times !  There are also numerous nominations at big Award shows like the TMF AWARDS and SILVER STAR DANCE in the UK . and by the way, let’s not forget he is THE MOST BOOKED DJ, ‘EVER’, in the NETHERLANDS.

His name counts many International classics / anthems  such as THE LAUNCH and EVERY SINGLE DAY, but also more recent (2015), highly successful co-productions as “THINK ABOUT IT” (FT. iNAYA DAY), ”PULP” and “POPACABANA” , which ALL reached BEATPORT chart positions between nr. 20 and 50, and came out on highly succesful international labels like VAMOS, CASSA ROSSA and WHOREHOUSE!  Dj’s like HARDWELL , NICKY ROMERO and many others from this calibre produced official remixes for his tracks, and dj’s like ARMIN VAN BUUREN , VATO GONZALES, LADY BEE and loads of others see him as one of their biggest inspirations for their succesful careers………. Jean is also the only Dutch DJ who produced more than 30 compilation CD’s (IT 4 to 9, MADHOUSE 1 to 12), for a total sales both national as international of 1.000.000 CD’s! Due to this international success, Jean has been spinning records at almost every place in the world! In his own country he played SENSATION WHITE in the AMSTERDAM ARENA 5 times/years in a row, and internationally he performed in more then 20 countries at numerous festivals and at the most prominent and well known clubs! On the party Island IBIZA he played in all mayor clubs such as Amnesia, Pacha and Privilige. His homebase remains in the Netherlands, where he’s also a very welcome guest at parties varying from 50 to 50,000 people. This high degree of flexibility in terms of locations, price and musicstyle , makes that his popularity is still incredible huge in his homeland,  both with his own as with the latest generation of clubbers! The youngest and last generation’s of dj’s even call DJ JEAN the founder of the international highly succesful dutch house and DJ scene, and GODFATHER OF THE DUTCH DJ’S !

In 2013 JEAN hooked up with MC MARON HILL (Without a doubt Holland’s finest on the mic….) , to gain even more power and impact for his performances! This resulted in a powerful tagteam so strong that it created a vibe and sentiment in the Netherlands, but also across the border, unheard off and often described as ‘STUNNING’ and UNBEATABLE !! As a result of this JEAN and MARON had more then 300 very succesful gigs in 2014 ánd 2015 , performing at worldwide infamous festivals such as TOMORROWLAND , DUTCH VALLEY and many more… They also did a very succesful POLAND tour in the summer of 2015 performing in at least ten of the biggest and best known clubs in this great party country ! These days Jean’s music style varies from the immense popular EDM sound to the more deep, soulful, groovy and uplifting clubhouse ! The dominant music style in JEAN’S performance completely depends on the crowd he is spinning for and party he is spinning AT, at that particular moment, therefore making him the most “adaptive” dj among the so called “big names”!

For 2016 a significant number  of top quality tracks are already on the list and waiting to be released, and this will certainly lead to even more international exposure and succes!