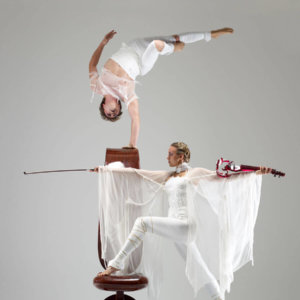 The “Duo Viola” was founded in 2007 with the aim of uniting the work areas of the two artists in a professional and aesthetically attractive form. The combination of acrobatics and solo musical performance is unique in it’s manner. The “Duo Viola” tells a love story between two artists – Viktor and Mariana who are also a couple off stage – and comprises the rapprochement and fusion of two art forms, music and acrobatics. The result is a performance full of passion and sensuality. The powerful corporeality of the Ukrainian acrobat Viktor Nebrat fits seamlessly with his partner’s beautiful viola playing, which takes up his flowing motions. In a symbiosis between body and sound, strength and smoothness, the two artists are subsumed in each other and sweep the audience away in this spectacle of the senses.

Like a siren, Mariana Vozovik uses her viola to lure her masculine counterpart,provides the tact for his movement, and with the gentleness of her sounds, makes his difficult, strenuous figures seem effortless, as if he were floating on the tones she produces. In return, she is carried along by the stream of his movements, which give her playing the character of an acting performance. They are able to touch the viewer with the elegance and grace of their performance. 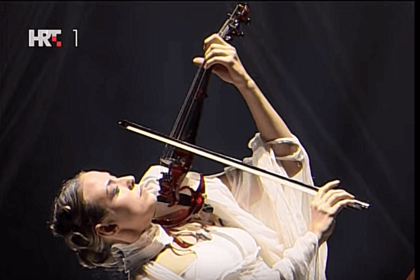