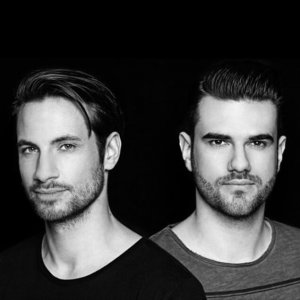 Jewelz & Sparks, formerly known as Jewelz & Scott Sparks, is a German DJ and production duo consisting of Julius Voigtländer (born 1984) and Gregor Brechmann (born 1991) that formed in 2011 and they are one of the most successful German EDM projects.

The duo is best known for their collaboration with Quilla on the single “Unless We Forget”, released on Revealed Recordings in January 2014 and “Pharaoh”, released a few months later.

2014: Commercial success and appearances as headliners[edit]
On January 13, 2014, the duo released their first progressive house single, “Unless We Forget”, with Canadian singer Quilla. The song was released on a Hardwell’s label Revealed Recordings. The single was played by major festivals, such as the Ultra Music Festival and at the Tomorrowland. In April 2014, a remix by Dutch DJ Julian Calor charted,[citation needed] at the same time that they released their next single, “Pharaoh”, through Revealed.

Their next single, “Kingdom”, was released on June 2, 2014, through Sander van Doorn’s label Doorn Records.[citation needed] As co-producer they worked with the German producer Virtual Riot. “Dope” was the title of successor single, which was released just three weeks later. This made a return to Flamingo Recordings. For the Be Yourself Music compilation, which appeared in the wake of sensational festival, they mixed the track again from new.

2015-2016: “I Can Fly” & “Hoe”
On March 16, 2015 Jewelz & Sparks’ first collaboration “Robotic” together with Fedde Le Grand was released. This continues to represent the area of Big rooms and the duo brought since the summer of 2014 for the first time in the Beatport top 20. The single was released through Le Grand’s label Darklight Recordings, which was established in January 2015. Just one month later, the release of “Parade 98”, which break a blend of modern vocal cuts and retro-tinged tech house elements there and is listening a shift to their typical Big Room style drop. The video is based on old rave record and should also act on absurd but at the same funny to the audience.

On September 28, 2015, Jewelz & Sparks released “Mental” through Le Grand’s label Darklight Records. Their next single “I Can Fly”, was released on November 30, 2015 through Tiësto’s label Musical Freedom and was Jewelz & Sparks’ first Beatport Top 10 hit and the first number one in the genre charts. As co-producer they worked again with Virtual Riot. “Drip” was released in March 2016 on Blasterjaxx’ label Maxximize Records. In an interview, they announced that they intend to collaborate more in the future. Their next single, “Hoe”, a collaboration with D.O.D, was released on April 18, 2016. While it was considered at first of which, that the “Hoe” refers to the English word for “whore”, it soon became clear that it is the involvement of the fans with the exclamations “Hey, hoe” during a performance.