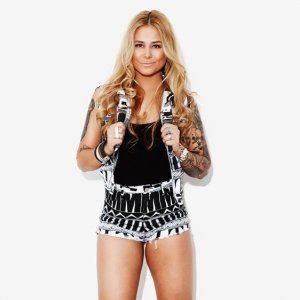 For the last last couple of years Boogshe has been a successful recording artist, Mc and singer/songwriter. She collaborated with big names like Laidback Luke, Starkillers , STFU, DJ Jean and Ralvero. Last year she got signed with Talpha Music. Acompany wich represents artist/composers such as Afrojack, Allan Eshuijs (Cascada, Tiesto and more.

She recently became special youth-ambassador for Plan Nederland. Plan is one of the oldest and largest children’s development organizations in the world. They work in 50 developing countries across Africa, Asia and the Americas to promote child rights and lift millions of children out of poverty.
As a special youth-ambassador for Plan Nederland MC Boogshe helps to fight for a world with equal opportunities for boys and girls. She partakes in the latest ‘Give the Finger to early & forced marriages’ campaign Plan developed together with MTV.

Next to her MC career she started at the beginning of this year a new pop dance-concept with her friend and up coming artist Steve Mitch. Together they are working on some hot pop & dance – tunes with several upcoming DJ’s and producers! Stay tuned if you want to know about the new pop eclectic dance  sensation : Kiss ‘N Ride.