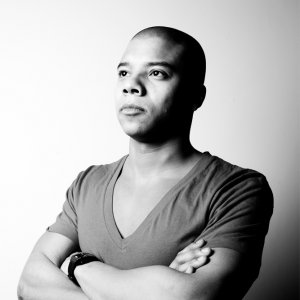 MC Roga followed his ambition at the age of 8. Youngster Roga was devoted to the drums, playing anything for Blues to Rock in local bands.

Becoming an adolescent, Roga fell in love with Hip Hop and started rapping along to the words of his new found heroes. Quickly mastering the skills, he discovered he was a natural at it, and started professionalizing his talent.

When introduced to House music, Roga felt a connection like he never felt before. His raw talent, obtained knowledge of music and mastered skills all fell in to place and set the stage for an upcoming Master of Ceremonies. After ”just grabbing” the mic at Club Monza (Utrecht, The Netherlands), Roga was discovered by Victor Coral and got introduced to the Chemistry Club Night organizers, who launched Roga as an MC for their ‘RUSH’ concept.

These days Roga has turned into a true performer; in his short career Roga has managed to work with our country’s finest like; Benny Rodrigues, Roog, Erick E, Michel de Hey, Sunnery James & Ryan Marciano and many more. In the meantime his musical diversity got noticed by big international artists as well. Heroes like Erick Morillo, Sandy Rivera, Kenny Dope, D-Ramirez , Antoine Clamaran and again loads of others have learned to appreciate all this MC has to offer. His voice has lifted spirits on major events like Dirty Dutch, Mystery Land, Latin Village, Luxurush, FFWD, and Dance Valley.

The raw vocals of Roga are featured in prominent radio shows presented by DJ’s like Tiësto, Sander Kleinenberg, Dennis Ruyer, Carl Cox, Roger Sanchez and have won over their warm support. Roga is teaming up with promising new comers Bart B More and Oliver Twist, even landed him his first big hit with their production ‘Do the monkey’. Followed up by the even bigger house classic Underground Supported world wide by numerous radio jocks.

Currently Roga is looking forward keeping an eye out for innovation and delivers it with a new duo called The Dudley Zoo. And also The SKOOLUNDERGROUND DJ Team is one of his numerous projects.

Asked about the secret of his success, Roga replies passionately; “Knowing just when to be quiet and when to take a crowd higher is only a beginning. MC’ing in my opinion is a true art form rather than a skill. Of course sharp timing is of the essence, but moreover it comes to a special sense that blends the emotions of a crowd, a DJ and his music together with a vocal outburst of energy. Only when all are just right, that divine sensation can occur. Capturing the hearts and minds of the people.”

The energy that puts Roga in an MC class of its own, promises loads to come for the near future; be on the lookout for a stage with Roga near you, and keep an eye open for a new release with yours truly!