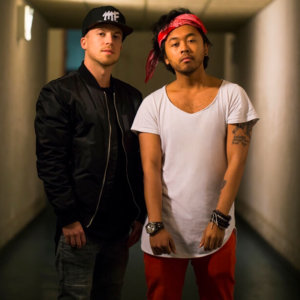 Taking over the world as solid name in the industry, Jelle Keizer & Andy Samin, better known as Dutch DJ duo Mightyfools, have been festival favorites for setting trends and pushing boundaries on the biggest events around the world.
Touring internationally for 10 years without a pause, they are the first Dutch-Indonesian act to breakthrough the dance scene living up to their rebellious motto: No Rules.
It’s rare an act can stay relevant so long without falling into quick hypes. Unique tracks like ‘Footrocker’, ‘Garuda’ and the collaboration with Yellow Claw ‘No Class’ are just a small selection of groundbreaking Mightyfools releases.
They’ve performed over 1000 events worldwide, including major festivals like Tomorrowland, Mysteryland, Creamfields, WorldDJFestival and clubs all over Europe, Asia and America, touring from country to country non stop as fan favorites at every event they’ve performed. Let the story begin.

The release of ‘Footrocker’ on Hardwell’s Revealed Recordings started a new chapter in the Mightyfools era. Hardwell himself premiered the track at Ultra Music Festival Miami and it became the most sought after track of the moment. The track entered the International Buzzchart on #1 and reached an amazing #3 spot in the Beatport main chart staying there for weeks. Many declared it to be biggest track of 2013 and it’s still being heard on main stages worldwide to this day.
Soon after they got recognized and picked up by the world’s biggest dance label, Spinnin’ Records and a continuing flow of club hits followed. ‘Put Em Up’, ‘Go’, and ‘Garuda’ all got millions of plays online, became playlist essentials in every A-list DJ set, and were among the most tracklisted hits of the year. Calvin Harris personally reached out to sign ‘Shaolin’ to his label Fly Eye Records, one of the most played tracks of 2014.

When long time friends Yellow Claw reached out for a collaboration, the first release of the Barong Family record label, ‘Lick Dat’ was a fact and kicked off a new chapter in both the Barong Family and the Mightyfools story. Being involved with the label since day one, a new crowd found it’s way to the typical Mightyfools sound creating an even bigger buzz with fans directly embracing Mightyfools everywhere they go. With the surprisingly huge success of ‘Lick Dat’, it turned out to be a game changer, a new sound to the dance music spectrum. The inevitable follow up ‘No Class’ gained an impressive 1 million video views in less than 2 months. Continuing their hot streak with tracks like Gangsta and the revolutionary For The Family EP, with the track ‘Girl On Girl’ becoming an instant Spotify hit, reaching high into the Viral charts. With the EP’s Fools Squad vol 1 and Fools Squad vol 2 and the Blood Brothers EP they pushed dance music boundaries even more, showcasing being versatile and catchy no matter what genre. Mightyfools trademarked their signature sound to a next level worldwide.
It’s obvious Mightyfools are where it’s happening right now, building a global brand and pushing boundaries, showing yet again that teamwork makes the dream work.
10 Years Mightyfools, 10 Years No Rules.