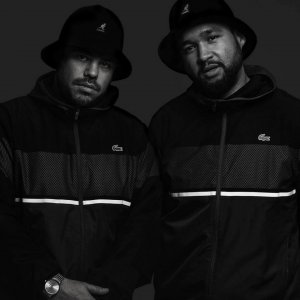 A house party can be the perfect place for creative minds to sync. It happened with Samir and Diego, the Dutch duo better known as Moksi, although it took a few years for them to perfect their kaleidoscopic sound of screaming leads and bassface-perfect subwoofer-loving drops, inspired by a mutual love of late-’90s UK garage.

Moksi’s first ‘track’ was nothing more than a 45-second snippet—which later became ‘Getting Higher’—but even that was enough to get them noticed by Yellow Claw. Soon after, Samir and Diego were recording their debut EP Brace Yourself (which includes ‘Getting Higher’) for Yellow Claw’s Barong Family label: no high expectations, just having some fun and tinkering with a couple of melodic ideas. Needless to say, the release blew up and led to Moksi playing their first ever DJ gig at the huge Tomorrowland festival in 2015.

Now firmly part of the Barong Family, Moksi went and branched out, embraced their creativity and came up with four tracks with incredibly hard-hitting drops, compiled on The Power of Moksi EP. After remixing the likes of DJ Snake (‘Propaganda’), Valentino Khan (‘Deep Down Low’), Hardwell (‘Mad World’) and Yellow Claw (‘Til it Hurts’, ‘Feel It’, ‘No Class’), Moksi delivered their third EP in the summer of 2016. The Majestic EP included the massive ‘Lights Down Low’ and was quickly followed by a major collaboration on DJ Snake’s debut album Encore.

Moksi closed out the summer of 2016 with their most catchy single (and video) to date: a collaboration with fellow Barong Family member Chace titled ‘For a Day’. They went on a tour of Australia and joined paters familias Yellow Claw for the huge Barong Family World Tour. The two duos picked up their mutual appreciation for a track on Yellow Claw’s Los Amsterdam album. ‘Open’ was released as a single (11+ million streams) and music video (3+ million views) in March of 2017 and has become Moksi’s most popular track so far. It was followed by the collaborative Connections EP with Chace (and a music video for ‘Lucky’), the Beatport Number 1 single ‘Hippo’ (with legendary Dutch duo Chocolate Puma) and the rave monster ‘Powermove’, alongside Hardwell.

Highlights of Moksi’s summer 2017 tour include performances at both Lollapalooza Paris and Chicago, DJ Snake flying in by helicopter for an appearance at a Moksi headline gig in Los Angeles and two consecutive weekends of rocking Tomorrowland. They have released over 45 tracks since that fateful beginning. Once they get going, Moksi are never slowing down.