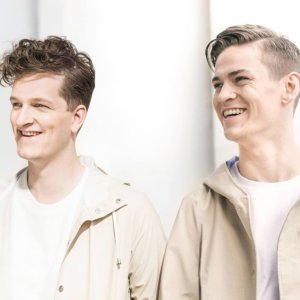 Things kick off in summer 2013, when Bart and Sam literally visit a different festival every week and instead of hanging out at the main stage they’re enjoying the smaller stages. This is where their idea of becoming Mr. Belt & Wezol is born. Since then, they’ve bonded over their love for dance music by raving away to UK and deep house music at festivals and by producing music of their own.
It’s a unique sound that arises, steeped in classic house vibes, and perhaps best portrayed with their first joint track, ‘Homeless’, released in 2013. Made by Sam, the duo’s fixed producer, the tune launches Mr. Belt & Wezol as innovators in creating light-hearted dance tunes.

Though the two are influenced by house music of the 80s and 90s they reject the idea of taking DJing too seriously and choose to formulate their tracks around the structure of standard pop songs. In doing so, they have carved out a new space for themselves within the EDM community which has landed them recognition from Tie?sto who was wowed by the duo’s melodic bootleg of Drake’s ‘Too Much’.
According to the duo, “most people think of loud hardstyle kicks when they hear the term EDM, that’s a shame because there’s so much more to discover”.

2014 sees the duo sign an exclusive deal with Spinnin’ Records and release some wave-making singles, including the massively successful Oliver Heldens collab ‘Pikachu’ (gaining support from loads of jocks, including Garrix, Guetta, Hardwell, Solveig and Diplo) and the catchy Spinnin’ Deep single ‘Time’.
By then it’s clear Mr. Belt & Wezol aim to establish themselves as a new act that breaks from stereotypical EDM. Their early 2015 single ‘Finally’ takes things to even greater heights, gaining initial support from DJs like Oliver Heldens, Sam Feldt, Mike Mago, Waterma?t, Pete Tong and Dirty Vegas, the record climbs the Beatport charts like crazy residing in the top 3 for weeks in a row.
Produced as a remake of the eponymous 90s dance classic, ‘Finally’ is the ultimate culmination of soulful house vibes (including the melody of the CeCe Peniston original) with a contemporary groove and bass line.
Mr. Belt & Wezol in optima forma, you could say, and they simply keep on getting better, as their 2015 collab with Freejak ‘Somebody To Love’ turns into a 2015 summer hit. The track re-uses the vocals of the famous 60’s hit by Jefferson Airplane and takes it to dancefloors worldwide. Again, all the major DJs pick up the record, which climbs the charts rapidly. The duo has caught a wave, and it doesn’t seem it’s about to stop anytime soon.