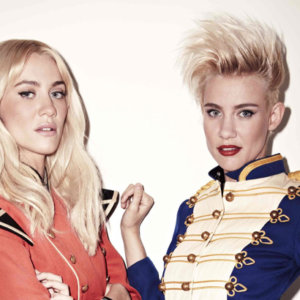 Nervo are Mim and Liv Nervo. This feisty sister tag-team have already started making waves. Best known for their collaboration with David Guetta on his recent Grammy winning smash hit ‘When Love Takes Over’ (performed by Kelly Rowland), they are quickly becoming a force to be reckoned with on the dance music scene. Based in both London & L.A., these globe-trotting Australian-born DJ’s are making serious noises on both shores of the Atlantic with their infectious blend of chunky electro-house.

Nervo are a unique, rising talent: hit songwriters, producers, and DJ’s whose skills have attracted some of pop music’s hottest artists, who are drawn to the girls’ poignant lyrics, indelible melodies, and bold, sassy electro-pop sound that bridges the gap between the underground and the mainstream.

They have already played main stage at Miami’s Ultra Music Festival, smashed it at Lollapalooza, spun the opening of Space Ibiza, opened at F*** Me I’m Famous for David Guetta and Will.I.Am. Most recently, they were the guest DJ’s at the prestigious ARIA’s, televised prime-time across Australia. Unsurprisingly, the media there adore them; press includes a 12 page spread in January’s InStyle magazine.

The talent doesn’t stop with their DJing. As songwriters Nervo have been busy behind the scenes for years with their great sense of melody and clever lyrics. The girls have co-written three songs on David Guetta’s current album ‘One Love’, written and produced several songs on Ke$ha’s debut album ‘Animal’ and have a cut on Kylie’s ‘Aphrodite’. Their passion for dance music has now led to a host of studio collaborations with a list of acts that reads like a who’s who in dance music, including, Deadmau5, Roger Sanchez, Avicii, Kaskade and Armin Van Buuren – as they work on their forthcoming artist album for Virgin Records, set for release in 2012.