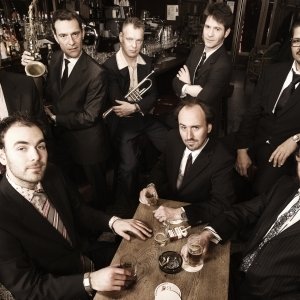 New Cool Collective have been happily grooving on 15 years of fame thanks to their unique mix of jazz, dance, latin, salsa, afrobeat and boogaloo. They are always funky, energetic and danceable no matter if they perform as a 19-piece Big Band or as a more compact 8-piece.

It all began in 1994 when saxophonist Benjamin Herman began experimenting with DJ Graham B in the Amsterdam nightclub Soul Kitchen. As Graham B spinned, Herman played live — a combination that was then unique. Eventually this evolved into the 8-piece New Cool Collective that is now equally at home playing clubs as it is festivals. And more recently, TV shows have been clamouring to make them their house band. But in the end they will always choose their own path. And wherever they stop along the way, there will definitely be a party.

New Cool Collective includes saxophonist Benjamin Herman, guitarist Anton Goudsmit, drummer Joost Kroon, percussionists Frank van Dok and Jos de Haas, pianist Willem Friede, bassist Leslie Lopez and trumpet-player David Rockefeller. The band once described their roles as: “Frank is the captain, Leslie the balls, Willem the brain, Jos the fists, Ben the main style maestro and motivator, Joost the joy and the sex. And David is Mister X and the most musical of us all.” What more do you need?

As pioneers in the Dutch jazz scene, these musicians were long seen as deeply strange birds. Jazz purists regarded their “Soul Jazz Latin Flavours Nineties Vibe” as too hard and fast. But once younger clubbers found their way to this throbbing dance orchestra then playing at Café Meander, the future arrived and both jazz lovers and jazz haters couldn’t stay away.

Their tours are often combined with special collaborations: such as with Kenya’s Mapacha Africa, Cuba’s Los Papines and of course Nigeria’s Tony Allen, the drummer who with Fela Kuti became the pioneer of afrobeat. In the Netherlands, New Cool has worked with C-Mon and Kypski, U-Gene, Trijntje Oosterhuis, George Baker and Piet Noordijk. Other highpoints include projects and concerts with Jules Deelder and rapper Typhoon.

As institution, New Cool Collective keeps reinventing itself with new sounds. After all, nothing could seemingly eclipse the success of their debut album. “The first CD from this 22-piece band is not only called BIG but is BIG on all levels. What do think of a 13-piece horn section? Or of the contributions from such stars as Georgie Fame and Trijntje Oosterhuis? Listen and you start dancing immediately!” (Algemeen Dagblad).

Their 2005 album Trippin’ was described in Het Parool as: “No soloist overshadows the collective. Trippin’ is about forcing you to dance.” Their tour with legend Jules Deelder was celebrated by De Volkskrant: “The theatrical tour that the danceable eight-piece jazz phenomenon New Cool Collective is doing with the jazz-loving poetry phenomenon Jules Deelder is one big dirty mess. But a very enjoyable, spontaneous and super tight dirty mess. While most programmes touring the theatres today drip with the worst clichés of cabaret, New Cool and Deelder break right through all that.”

About Out Of Office (2008), NRC Handelsblad said: “Featuring mellow surf tunes, happy ska jazz, afrogrooves and jazz rock, Out of Office is like a magic ball that keeps changing colour. There’s only one constant: the atmosphere remains infectious and sunny throughout.” Their most recent album Sugar Protocol (2009) was also positively received by press and public alike. “It begins with a rudderless electric Rhodes piano, a sound that does much to define the New Cool Collective. But then comes a huge blast of percussion. And what follows is a raw and festive ride full of surprises where you will recognise very little of their original sound.” (De Volkskrant)

When New Cool Collective performed in the Paradiso in 2007 with Dutch rapper and Silver Harp 2009 winner Typhoon,State Magazine stated: “…this concert may be remembered by the public as the moment of birth of a new phenomenon in Dutch music.” Another magazine, Revue, gushed even more: “I want an album of this shit. I want Ty at North Sea Jazz. I want Ty on Blue Note.” All were rewarded when an album arrived in 2009 in the form of the EP Chocolade by New Cool Collective and Typhoon.

On the 2nd op April 2010,  New Cool Collective released a new Big Band album, Pachinko. New Cool Collective made a highly influential trip to Japan in summer 2009. They sucked up impressions from everywhere: from the commercial and video jingles coming from their hotel room’s TV, to the wacky jackpot soundscapes emitting from the gaming halls of Tokyo’s entertainment district Roppongi. Now add to this mix some “punkjazz”, a more dominant rock sound, a 1980s feeling (or is it a 1990s one?) and some throbbing electro drive, and the results are both personal and intense.

In short, New Cool Collective Big Band’s PACHINKO is a strong and kinetic album that will leave music lovers stupefied. Musically it’s a masterpiece—albeit a schizophrenic one—coming from a group that stands apart from every other big band on the planet and who once again prove what amazing stuff you can up with as long as you are open to reinventing a genre 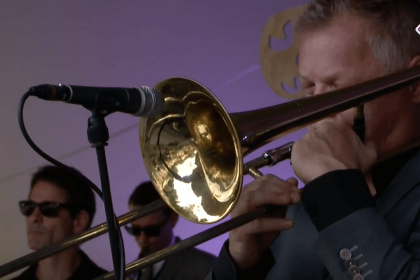 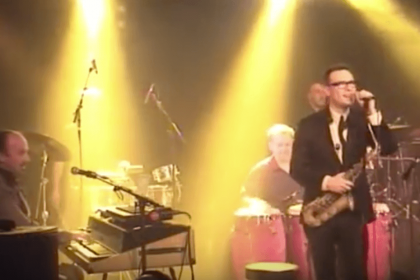