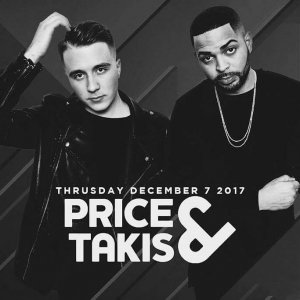 Price & Takis (real names, Peter Takis and Micheal Assalin) are DJ/producers from Winnipeg, Canada, with a passion for pop and dance music. Their signature style combines the worlds of dance music — most notably, the sub-genre known as ‘trap’ — with a pop influence. What began as a bootleg remix of Zara Larsson’s “Never Forget You” quickly became one of the most-streamed music tracks on YouTube in 2016, garnering millions of streams from around the world. Currently signed to Armada Music, Price & Takis are well on their way to spreading their distinct sound worldwide. The duo have DJ’d at internationally recognized nightlife venues, including, Marquee Nightclub & Dayclub in Las Vegas, and they have played alongside acts such as the Chainsmokers, 3LAU and others. With a fanbase that’s building organically, Price & Takis have already become a name on the lips of music-lovers the world over. This is just the beginning.