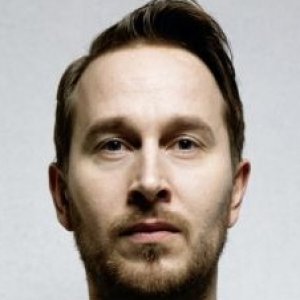 He spends over an hour playing with a cardboard box, a drum pedal and a microphone-like object. He’s not listening to what’s being said around him, and so he never answers the question about what exactly he is busy with. Until suddenly we hear a boom-boom-chk-chk. ‘Wow! Check out this kickdrum… Sounds perfect!’ he shouts, as happy as a child.

It’s a neurosis. Steye makes music because he can’t do much else. When not near an instrument or some beatable object, he quickly becomes, as he describes it, as irritable as a porcupine chicken. Music is the way Steye deals with the world. Through songs he turns his personal sores into something more manageable and swinging.

It’s tricky to label his music. It all began with making some beats on a sampler and later he developed into a singer/songwriter. He casually combines Prince-like funk with elements from Britpop. But he is also recognised as the inventor of campfire techno. It comes down to creating his own rhythms over which he can be open and free. He doesn’t have to become a famous pop star. He just can’t help but make music. Music with balls. Music that makes your body shake without letting your head get in the way.

Steye’s second album Lovedrum reinforces what made his acclaimed debut, I’m Just Here To Make You Feel Warm, so original. It’s self-produced and he played most of the instruments himself. The results form an honest portrait of the year-long phase he happened to be going through at that time: heartbreak. These songs ended up being a safety net as he lost the love of his life. You can literally taste therealness in, for example, the song ‘Baby Come Home’ recorded in Kenya. The lyrics never made it to paper and he sang them in one take.

Steye’s music comes with horizontal hip movements that still manage to go deep. He gets under your skin and then leaves behind a trail that shines and glistens.

Steye is a pioneer in using live interactive visuals during concerts. In his universe, sound and image are always related. The visuals are not mere backdrops but actually participate with the music. For example, the Octopush has a Playstation controller that allows him to play drums and bass coupled with specific imagery.