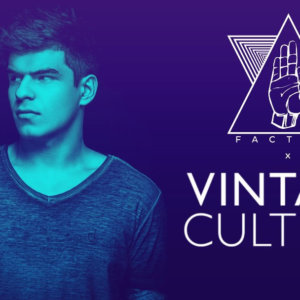 Lukas Ruiz, known as Vintage Culture (born July 7, 1993), is a DJ and producer of Brazilian electronic music genre house music, his musical style is easily described as a big infusion Room with Deep House. Vintage Culture had a rapid rise launching versions as “Blue Monday” by New Order and “Another brick in the wall” of Pink Floyd, who soon began to viralized on the network along with their versions of “Beth balance” of Cazuza and “Bidolibido” Fernanda Abreu.

In 2016, he released the EP “Hollywood” by Ganza seal Skol Music in partnership with Spinnin Records. Soon after he charted his remix of “Drinkee” for double Sofi Tukker released by Ultra Music at # 4 Dance chart of Beatport and even after a month of release has remained in the Top 10 with it. But it was with “Wild Kidz” released by Spinnin Records that Vintage Culture began to gain international recognition, the song entered the “Global Viral” Spotify and received support Oliver Heldens, EDX and Sam Feldt.[1]

In 2015, Vintage Culture appeared in #118 in the TOP DJs list of British magazine DJ MAG and #2 on the list of best Brazilian DJs House Mag.[2]

Vintage Culture is also a businessman and beyond the label Só Track Boa, has a club in downtown São Paulo, the Air Rooftop.